28.10.22, 6 pm, Text and Talk
As part of the exhibition 'Animals on my mind' GiG Munich would like to introduce 'Text and Talk,' the first of a series of discussions aiming to make philosophical texts more accessible. Working as a group, we will take a selected text and try to see if we can make sense of it. No registration required.

When I try to recall something or other, I do not immediately think of animals, though perhaps I should. I think of things that happened and other things that happened before that: points on an ever distant timeline. A line of evolution, of successful pairings, of inherited traits. But what about all those other things I don’t remember? Unclear, awkward pairings, stolen encounters in the night? Different species, no offspring, yet also a closeness and an intimacy.

Animals on my mind is the second of GiG Munich’s Re-collection series of exhibitions at Lothringer 13 Studio, featuring the work of Julia Klemm and Zuza Piekoszewska.

GiG Munich is a space for contemporary art run by Magdalena Wisniowska. Active at Baumstraße 11 between 2015–2022, GiG Munich is currently operating nomadically as GiG air, presenting work at different locations both physical and virtual. For 2022, Lothringer 13 Halle invited GiG Munich to produce the Re-collection exhibition series at the Lothringer 13 Studio, a continuation of the previous series Thinking Nature that took place at GiG in 2021.

Animals on my mind

Last night I tried to think of the first animal I can remember. My grandmother’s black, shaggy dog perhaps? Or earlier, as my mother would say, the jellyfish that stung me on my wrist. I was only two then. Or earlier still I remember the fish on the beach I would make out of the warm sand. But maybe I am thinking about this wrong, maybe it is not about the actual animals I might or might not remember, but rather that all memories belong to the animal kingdom. Maybe memories are like animals.

First of all, there are the individual memories of different things that happened to us, personal memories like family pets, domesticated. Zuza Piekoszewska shows a small landscape of fields in the early morning mist as described to her by her parents. Elsewhere she remakes a kind of very specific dish cloth her mother used in mid-90s Poland, pastel, striped, homely. Julia Klemm’s lions do not prowl but play around the rubble like kittens. The lions though are a different type of memory. They belong not just to us, but to our culture, much like in the taxonomist’s biological classification, a species belongs to a genus. These animals are ordered along evolutionary lines, significant events of our shared past marking out a historical trajectory. These lions that Julia Klemm gathers, derives from 3D scans of bronze and stone lions dotted around European capitals, traditional symbols of strength, courage and nobility in our Judeo-Christian tradition.

Finally there are the memories of the pack, memories like the swarm of cicadas that emerge all together and so suddenly, after 17 years of underground sleep. History has no place for such memories; this kind of animal is missing from the taxonomist’s classification systems.  It is less about individuals, identification and contextualisation and more about how to think the animal as already a population. Memories are never single - there is never the one lion. An animal before it is this or that animal, my animal, yours and ours, is an animal like another, but also different. I mean lions as the same but also as mutants, the repetition of genetic material always harbouring mutation. These memories of the pack are always unknowingly carried with us. I am a product of memories I do not even remember; we are a multiplicity of memories that history cannot contain. The most interesting things happen in between the lines, in shared proximities where the discernibility of points disappears. As Deleuze and Guattari write,

The line-system … of becoming is opposed to the point-system of memory. Becoming is the
movement by which the line frees itself from the point, and renders points indiscernible…
(Thousand Plateaus, 294)

Here becoming is an anti-memory. To really learn how to remember animals, we must first forget. 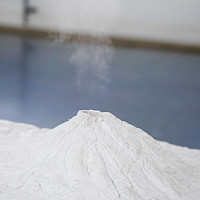 WE BREATHE THE REMAINS OF EVERYTHING THAT WAS

First part of the exhibition series Re-collection organised by GiG Munich at Lothringer 13 Studio from July to December 2022.
read more